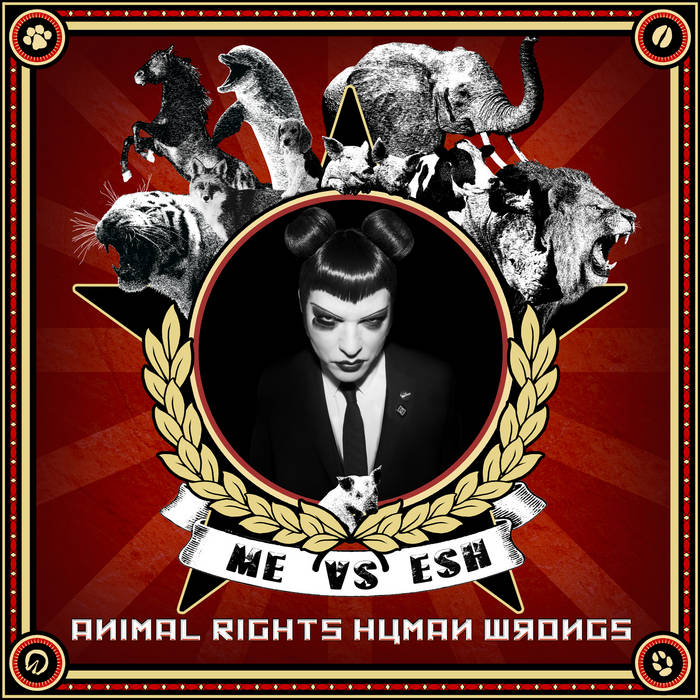 There is a war taking place against animals across the globe right now.
Mankind is inflicting pain, suffering and death on a colossal and unrelenting scale and showing no signs of compassion towards our fellow sentient beings.
Through unethical mass meat and dairy farming practices,
fur farming, government organised culls of badgers, foxes,
stray cats and dogs and dolphin and whale culls.
imprisonment of animals in circuses, zoos and aquariums
where animals are kept against their will and forced to live in un-natural surrounds simply as entertainment.
Endangered species are fast disappearing from a planet we all share
due to the greed of man, poaching ivory for financial gain
at a rate that can no longer be sustained.
Humanity is to blame and there is no kind in man
and this war against animals has to stop now.
Our choice of weapon is song.
We need to educate future generations to value and respect our animal neighbours and tell their governments and leaders that this animal holocaust can not continue.
You can help us by sharing this song, playing it loud and ultimately becoming vegan and respecting the wildlife around you.
This song aims to raise awareness whilst all proceeds from it’s sale will be donated to two charities that have animal welfare as their goal, Saving strays in Sarajevo and The Mayhew Animal Home in the UK.

VERSE
SHE AIN’T NO LADY THAT GAGA
AND LOPEZ SHE’S A DYING STAR
DEAD ANIMAL FUR AS A COAT
WONT WATCH THE KNIFE THAT SLITS THEIR THROATS
DIOR WITH THEM SPELLS CRUELTY
OFFENSIVE TO HUMANITY
FENDI, FASHION, L’OREAL
YOUR BEAUTY IS THE LOOK OF HELL

(CHORUS)
ANIMAL RIGHTS HUMAN WRONGS
WHAT IN THE HELL IS GOING ON
EMOTIONS COMING OVER STRONG
JUST BE THEIR VOICE, JUST BE THEIR SONG
DON’T HESITATE DON’T JUSTIFY
YOUR ACTIONS MEAN YOU CARE LIKE I
ANGER AND THE SHAME WE FEEL
IT’S AN ANIMALS LIFE NOT MANKIND’S TO STEAL